I have a dream! Its Ted Rogers on Family Fortunes?!

I had a dream last night, nothing new there then. But it was the nature of it which got me thinking, number one I must have been watching Challenge last night and two, it would work...

What would? I'm hearing you saying, well the idea that I'm going to put out there maybe strange to some but to others it might get some people thinking 'Hmmm... That might work!'

My dream was that Ted Rodgers was presenting Family Fortunes, alright it never happened in real life but it seemed to work and it seemed right somehow. It might have been the product of some many gameshows in a day, thought that got me thinking which hosts could switch shows and the show would just as good. But it did once happen though, in a Christmas edition of Sale of the Century on January 2nd 1981 it happened. Nicholas Parson was a contestant along with Tom O'Connor and Derek Batey with Steve 'Pyramid Game and voice-over man' Jones asking the questions of them. Plus Batey and Parsons appeared with Bob Monkhouse in a celebrity edition of Family Fortunes, so two examples there and also the tale I've told you about the potential swap of Monkhouse and Bruce Forsyth when Michael Grade wanted Family Fortunes for Bruce. 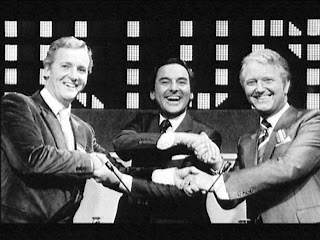 "Should old acquittance be forgot..."

If Ted Rogers could be taken out of 3-2-1 and put into Family Fortunes, that would mean a space there and I think that maybe Michael Barrymore or Brian Conley would be perfect choice to join Dusty, Caroline and Lynda. With their all round entertainment skills they would be able to handle anything the show would throw at them, plus the rapport with the acts as well would match the enthusiasm of the contestants. Maybe in hindsight Conley would have been the host after Rogers to take over or to refresh the show, but with Barrymore doing the show that would leave Strike It Lucky open for a new host...

Strike It Lucky is a simple format really, not saying that it is a cheap format. But in the right hands it can be done well, part of the time the format with Barrymore is him doing his act interacting with the public. First of all, Les Dennis showed his ease at doing that on Family Fortunes, so he could be my choice, though hang on  ... Maybe what about Joe Pasquale, his chance came with the revived Price is Right. His sillyness provided to put anyone at their ease, so Pasquale would go there.

Thought The Price is Right was a quandry in itself even before the late Leslie Crowther too his place in asking people to 'Come on Down!' Joe Brown, along with Russ Abbott was considered to present the show, Abbott in himself was said to have asked if he could have Bella Emberg as a hostess. So maybe Abbott though subverting the format was the was to go, something which would become commonplace in years further to come. Brown himself had been the host of Square One for Granada, but being seen as a man with a common touch getting close with people who would trust him, as the same would said for Bruce Forsyth and Joe Pasquale.


For The Price is Right, even through that onto into Whodunnit which had Edward Woodward and Jon Pertwee as its presenters between 1972 and 1978 which took an almost Cluedo-esue format with a panel trying to work out who committed a fictional murder as in the board game, showing that in a show a host can be interchangeable within a format. Win, Lose or Draw had three during its daytime version including Danny Baker and Bob Mills, not including Darren Day doing a 'Teen' version and Liza Tarbuck doing the 'Late' version. Its not so much that hosts can jump from one show to another, but when a format is put around a host, it fits like a glove but when watching a show just think that a host maybe have been up for other shows as well...

But how about Win, Lose or Draw? Well, why not give it a former contestant? I'm not talking about a celebrity who appeared on their but someone who was a member of the public... That man who would be king would be Johnny Vegas, he appeared on the show as an up and coming comedian but surely he would a good choice for a revived version of the show. Though as an interesting aside, Danny Baker also appeared during Bob Mills time as host, this time as a celebrity in week 5 of the 1995 series. Little is known about where executives get inspiration from for choosing a host for a show, sometime they will look upon it as maybe finding someone who's been out of the public eye to being pulled into a role or maybe coming from left field.

Left field? What about a cockney taking on a children's quiz show? Well, Colin Nutley wanted Mike Reid to present Runaround in 1975, by thinking his firm but fair style could work with kids and it did over two spells between 1975 and 1976 before returning in 1978 to the programme's end in 1981. Though Leslie Crowther and Stan Boardman were host in the intervening years, taking it to today who could do it? There's one man for the job, the love of the quirky... Londoner... and always funny... How about Danny Baker? There's left field for you! Baker could take the items and give it his own brand of spin... But what about this for a link? Gary Crowley who filled in for Baker on his BBC London show whilst undergoing treatment, did Poparound from Central... The last time the format was put to a series, so maybe it would have come full circle in that way.

We can only theorise about what might be, but one host might be good for another's position... John Humphrys for the Generation Game anyone?