Whilst listening to Danny Baker this morning talking about television repairmen this morning, it provoked a thought. Some of you might say 'What a first one in years?' But it begs the question, is the box the corner just like a chair?

In our family we were a renting family for many years from Radio Rentals, until a win on the pools got us a brand new Goldstar television set (Goldstar? Nah, me neither...) thought that for me was the last of the television sets which were a portal to world away from my own and rather a bit of furniture. Nostalgia maybe rose tinted but there was always a thrill of a set looking like it was carved rather then just being moulded from plastic, plus it gave something to the viewing experience. Can you imagine watching Brucie and the Generation Game on what is amount to an ice cream tub? 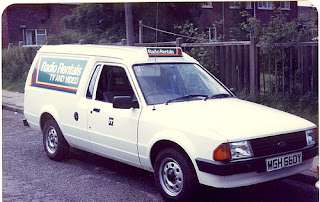 The set itself way before FST, Fasttext was a rudimentry affair it seemed. Though the workings needed a gentle touch from a repairman with the valves inside or a good old whack on the side whenever the vertical hold went,
take for instance my grandparents had a repairman who was local to them in Cosham called Mr Head, he would come out brown jacketed and booted to twiddle with knobs and recalibrate the set. But it was a skill to be able to this, with proper workshops and tools which seemed they were from the Soviet Union. A set could be gone for ages whilst it was repaired, but it made the love for the set grow even stronger like a child going into hospital. 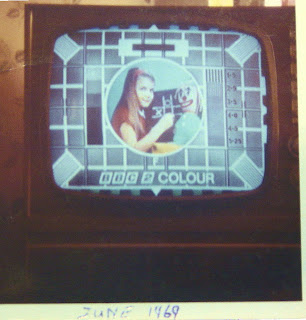 My first set me and my brother had was an old Pye set high up on a wardrobe, until it let out a puff of smoke telling us that it was knackered. But that set had seen everything, watching The Muppets, the launch of Breakfast Television, the launch of Channel 4. It was a friend to me and I got over it, we got a new set to replace but in this age of widescreen when I see a set like the Pye Colourmaster, it gives me a warm glow. Overall, with televisions today I would always take HD and stereo sound. But the thrill cannot match getting a new set from Radio Rentals, it might seem like a joke to have set with 'Supersound' years before a full stereo service but those touches made it for me, even Danny Baker reminded people that he had a set with a hue button to be able get the skin tone right by increasing the browness or blueness. These quirks are what make greats sets great, the clunk of the buttons as you switch it over, even with a Grundig set we he, there was that ability to tune it in yourself without any micro technology to do it for you and you knew you had done it.

To some, looking at old sets maybe boring, but think how far we've come from the early days of a disc spinning around to create a picture. The love of an old set is something, but nuturing them like a classic car is another thing...