"Hello there Mrs S.." - Marshall, Renwick and End of Part One

So when was it that television started to take itself so seriously? I can understand with such difficult and serious subjects to contend with, that the news and current affairs departments have to be on high alert all the time. Though the rest of television has developed almost a hardened shell to itself,  but it wasn't always like this.

Over the years there's been attempts at spoofing the way television is seen by itself, from Channel Eight trying to looking into the future with 90-year old Nicholas Parsons still presenting Sale of the Century, KYTV covering the satellite revolution and everything that brought to the screens. Plus there have been attempts such as The Kevin Bishop Show, who parodies seem to almost say "Wasn't all old TV bad? A-ha-ha-ha! I can do it because I'm popular..." and also strands of programming with Focus North, getting right down to the ground the view local news has of itself with reports and the presentation style.

Though truly the only show who got the art of spoofing just right was Andrew Marshall and David Renwick's End of Part One, the whole two series just released on two DVD's by Network. This has brought to an end a very long journey for this series to be seen once again outside of just clips or footage on the internet. The style of the two series are very different, but even in the first series broadcast made in 1978 and broadcast in April 1979, the defining features of what the programme would be remember for were there, such as the spoofing sketches and mock continuity announcements. 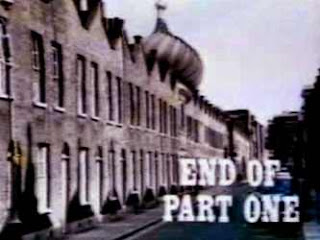 The world of television was played though the prism of Vera and Norman Straightman who live on Funnyname Street, with all different odd characters invading their lives and also the television they watch themselves. The premise even in the opening titles is to be a parody of Coronation Street, the interlinking stories of both characters, the titles featuring rows and rows of Northern terrace housing and also Corrie-esque theme tune. This itself has a feeling of the influence from Monty Python like their sketches taking place in houses, such with the cast playing supporting parts of people who surround the Straightman's lives i.e. people they meet along the way rather then characterised of anyone in particular.

The intertwining storylines provided by the day to day lives of the Straightman's allow the sketches to played off such as Norman going for a job as a spider, the Straightman's having a new lodger who's a parody of Superman even speaking in cartoon-esque speech bubbles when first having a conversation with Vera. But with Vera and Norman going to the cinema allows the show to widen itself up with them getting the cheapest seats to see 'Christopher Columbus - A Film by Samuel Goldwyn' and with the tickets being so cheap that they are on the film itself! Allowing them to be surrounded by the action, with the actual cast of the spoof film oblivious they are there and the patrons with the cheapest priced seats having to follow the actors wherever they go to. 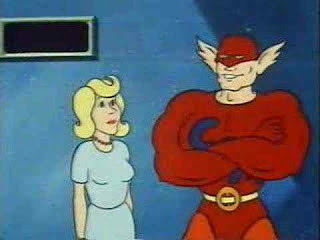 The spoofs of the programmes are thing which makes the first series stand out, with World of Sport given a good ribbing and also Raleigh Gilbert who read out the racing results on the programme was given special treatment by the writers over his annoying voice when reading the results. Also The Return of The Doughnut, a spoof on the returning Saint series with Ian Ogilvy who has gets plenty of jokes at his expense as well as well a spot on parody of Weekend World although a LWT production, jokes made at its expense such as it having only about two viewers in the slot it was broadcast in at that time. Though all of these programmes were all produced by LWT and they were the biggest targets for the show, but the management didn't have a problem at their best efforts being ribbed on regular occasions by the show's writers.

But the first series was broadcast before the 1979 ITV Strike which started in August of that year, which partly may have been the reason why there wasn't another series broadcast until October 1980 and would have been made earlier that year. Such as the backlog created by the stopping of production, that all new production would have been halted to allow what was still to be done to be cleared first. So any new series or returning series would have have waited at least till Spring 1980 to be filmed, but this had a unique effect on the series. By this time Marshall and Renwick had gone to work on BBC 2's brand new sketch show 'Not the Nine O'Clock News' using this to keep their writing hands in whilst End of Part One was off the air. With them writing for Not the Nine with its more topical humour, meant they could change End of  Part One to more a satirical type of show and also expanding the spoofing to be more elaborate and more cutting against its targets.

Though with the first series being more lighter and being shown mainly in a Sunday Afternoon slot, led the schedulers at LWT and also Michael Grade thinking this was the right slot for the show as it appealed more to older children and they made sure that the schedulers got the message in episode five  where they included a sketch called 'Kiddies Time' with a very twee style and what they thought Children's Television was like similar to Monty Python's 'Storytime' sketch which itself turned that the story being read out by Eric Idle was smutty and couldn't be read out at all. Even putting on the screen in captions what they though of this and alluding to a 'Unexpected Nasty Bit' which is going interrupt the sketch going on, building up to it with a spoof warning and countdown until its stated that they've lost it. Well, until the end of the episode a final quickie sketch to state an vinyl album of the show is out for release now, featuring the nasty bit as its cover... A man being beheaded by an axe, rather violently..

The cast itself with Harris and Coffey who had been in The Burkiss Way were joined on End of Part One by a pre-Only Fools and Horses Sue Holderness, actor Tony Aitken who had previously been seen in Porridge, David Simeon who had been in Z-Cars, Fawlty Towers and The Liver Birds amongst his credits and finally Dudley Stevens mainly a stage actor and also had done some music hall but previously had been in Crossroads as an upper-class landowner during the mid-seventies. All of them with comedic experience but with the ability to play character roles and this is what makes the series better for it as well. But the targets as such, were the programmes the viewers had seen also with the noticeable things as well that went on during their broadcast such as Nationwide or Mr and Mrs being spoofed as so sweet that its not safe for diabetics and the presenting style of Derek Batey, maybe barbed but always right in how its done and any average viewer could recognise the obvious things though its the hidden things which make the programme even better.

So finally there is a record of this show after many years being recognised with Harris, Coffey, Holderness, Aitken and Simeon still alive, presenting and performing but also as a tribute to Dudley Stevens who died in 1993. Finally at the end of the series Norman and Vera reappear poisioning the characters in the last spoof, hopefully thinking they'll be the stars of the programme now the rest of the cast are dead. Only for the LWT end caption to appear to snub that thought out straight away.

It may not be in the top level of great shows and Marshall & Renwick may have written shows which have been better recognised both together and alone. If they hadn't have had End of Part One, then there wouldn't be no Whoops Apocalypse or Hot Metal, no family with 2 point Four Children or no Victor Meldrew saying "I don't believe it!" plus the magic and mystery of Jonathan Creek. Whatever they have both done since, they both have to thank Vera and Norman Straightman of Funnyname street hopefully with a bunch of Roses Chocolates...