Dusting off the cobwebs...

So Challenge has decided in their wisdom to bring out the big guns for the Autumn meaning that they are around again to showing 3-2-1, now that Sky has taken over Challenge it means that along with Deal or No Deal coming to the channel other shows are due an airing from the same cannon.

ITV was a powerhouse of gameshows from the late 70's to the mid 90's, as such both Bruce Forsyth and Bob Monkhouse switching between the BBC and ITV during that period. I remember watching these show as a child whenever they were on and it was like another world away from my own. Apart from Play Your Cards right, which at that time and still now has the most exciting and lively start to a gameshow. For the early 80's it was big time for Brucie coming off the back off his 'Big Night', yet the tales about Michael Grade wanting what turned into Family Fortunes are available from books, the internet and other media. It felt right for Bruce, taking on that role and its success stretched throught out the 80's with revivals as well.

But many of the gameshows are forgotten now, let me lead by the hand as we go for gold or strike it rich in Boggenstrovia's Guide to shows which have been forgotten by the public...

1. "A difference of opinion here Geoffrey..."

Winner Takes All, the only gameshow to combine general knowledge and betting. Starting in 1975 with Jimmy Tarbuck at the helm until 1986, it was a strange affair to the young child who didn't know anything about betting at all. All I knew is if they got an answer right, they got a whole load of points for it. I didn't know what 10-1 was, I had heard it on World of Sport but what it actual meant was a whole different matter.

Jimmy was the man with the cash even at the start of episodes when he brought it on in a suitcase, little wonder that Securicor wasn't there to protect him with something like that. Though for Play Your Cards Right's titles, the original titles to Winner Takes All seemed like a psychotropic affair. Numbers, thousands of Tarbys and lots and lots of colours, later on the titles were a bit more calmer...

In the final, two contestants would battle it out for £1000 with the winner getting the chance to get more money by coming back the next week but if they lost they would only get the £100 losers prize. So the greed was there, for the people who wanted it plus also the spangly sets. Well, a spangly curtain at the beginning for the contestants smile over in a circle, but with a spinning Yorkshire Chevron as well. Yorkshire loved the Chevron to do things in their gameshows, just to make you more scared if you weren't already scared enough of it. Poking itself around the door with a maniacal smile on its face, playing thousands of Tarbys coming towards you in your sleep...

The Saturday teatime show which would be the cousin of Celebrity Squares but wouldn't write to it at Christmas. With Lennie 'TSW's Opening Show" Bennett at the helm nothing could go wrong really, by its nature all it was was making jokes to their  'Punchlines'. See what that they did there? With eight guests supplying the punchlines and to confuse the situation, they would change their boxes to confuse the contestants or put another way to make a joke sounds more rude then it already was. For three years between 1981 and 1984, even taking in an FA Cup Final appearance on the big day itself to get viewers away from the BBC. Taking in the atmosphere were Matthew Kelly and singer Rose Marie who made regular appearances through the series, with celebrity guests teaming up with a member of the public and when they got to 150 points they would win the game and the losing contestant got a Lennie Bennett doll during the first two series, a odder consolation prize I cannot think of. But after series three, they got some champagne and some glasses, so from the son of Lennie to something to drown their sorrows. 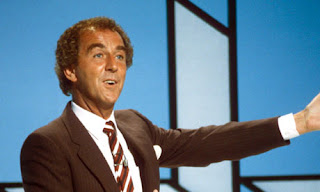 "Who'll bid me for this Gus Honeybun?"

It was another show with strange titles, not animated but in 3D. I think it was just a game by the television industry to see who could make the most lavish titles for the least money, it was a case Lennie ruled the gameshow universe for a while like all new gameshows. Whatever show was put in front of people, it was lapped up quicker then an analogical situation. I wish Challenge would put this on their schedule, maybe I'm a sadist for the show but it was good, well in my mind it was.

Two to be going on with there, it maybe strange to say that maybe a move to Freeview has saved Challenge judging by the number of people who are watching again, from the days when it shared time with The Family Channel when it first launched on Sky. But looking at the list on Wikipedia of the shows which they have shown over all that time, it reveals that a lot of shows could be shown. But its become a very British channel again, taking shows like 3-2-1 and Blankety Blank and putting them on the channel again. Something to say about it, is that they have settled in nicely and with a presence on twitter as well @ChallengeTV

Maybe a hint or two could be sent to those who run it to put some more archive shows on there, dust off the cobwebs and give us some Punchlines!
Posted by Boggenstrovia Van Borgwick at 16:58